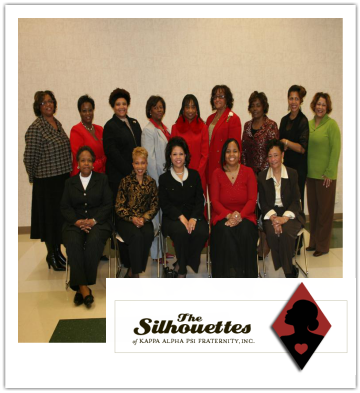 The Organization, formerly known as National Silhouettes came into existence because of a need. Many wives accompanied their husbands  to the Grand Chapter of   Kappa Alpha Psi and found themselves alone and in need of activities to fill   their time. Later, the Kappas asked their wives to act as hostesses and plan  activities for visiting wives and children. Many such groups remained together   and organized permanent groups, calling themselves "Kappa Wives" or "Kappa Alpha   Psi Silhouettes".

In Columbus,  Ohio in the year 1945, at the 35th   Conclave of Kappa Alpha Psi Fraternity,  Inc. a need for a National Organization   for Silhouettes was felt. The first chairperson of this effort was Mrs. Willa   Ranson of New York. Mrs. Ransom asked the New York Silhouettes to host a meeting   where organizational plans
could be discussed. An announcement of the meeting   was put in the Kappa Alpha Psi Journal. On December 31, 1946, a group met at the   home of Mrs. Harold L. Edgehill of New York for the purpose of laying groundwork   for the formation of the National Organization of Kappa Silhouettes. At this   meeting, the committee present suggested the formal name of Kappa Alpha Psi Silhouettes. It was decided that the group would elect officers at the California meeting in 1947. Their were volunteers from Philadelphia, PA.   Detroit, MI, Topeka, KS. Columbus, OH. and New York, NY. to serve on the  committee. The formal organization of Kappa Silhouettes became official in   August of 1947, at the Kappa Alpha Psi Fraternity, Inc., Conclave in Los   Angeles, California.
Chartered and Incorporated on June 1, 1946 All Rights Reserved Chattanooga Alumni Chapter of Kappa Alpha Psi Fraternity, Inc.