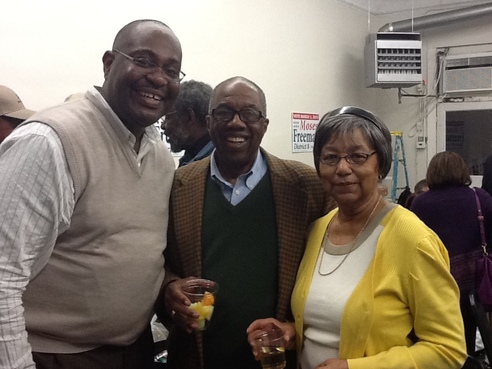 Brother Freeman (center) poses with Brother Chris Ramsey and Silhouette Louise Freeman during his election victory party.
Brother Moses Freeman was elected to the Chattanooga City Council -  District 8 on March 5, 2013. Brother Freeman has worked in a variety of capacities. He has served as an educator in the Chattanooga Public School System, Director of the Chattanooga Boy's Club, Administrator ­of Neighborhood Services and EEOC with the City of  Chattanooga, Neighborhood Physical Revitalization Specialist with the Community Impact Fund of Chattanooga, and as a developer with his own development company which developed the first for-profit single family housing in the M. L. King neighborhood in over 50 years.
Chartered and Incorporated on June 1, 1946 All Rights Reserved Chattanooga Alumni Chapter of Kappa Alpha Psi Fraternity, Inc.