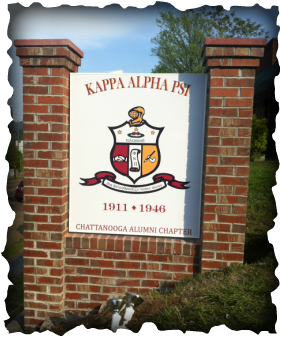 On Sunday, January 22, 1939, a group of Kappa Brothers met at “Paul Tatum’s Place” for the purpose of organizing in Chattanooga. Members present at the meeting were Alex F. Carney who served as chairman, Alfred Scott, A. D.  Robinson, Willard Boone, R. Morrisey and C. B. Robinson who as elected as Keeper of Records. Also present was Brother Grady Sherrill of New York. Little  Brother Walter Parks was invited to socialize with the group after the meeting. The dues   were set at twenty five cents a week. Total collection at that meeting was   twenty four cents, of which ten cents was spent on a deck of cards. At the   February meeting the group was joined by Brothers Roy O. Vaughn, Oliver Bryant,   Thomas Prater, K. N. Williams, Robert J. Smith and Bruce Rumley.

In the fall of 1951 Brother Alex Carney who had been the   polemarch of the  group since its inception was replaced by Brother William Days.   Among the other new names to appear on the records were: Louie Robinson, Charles   “Billy” Green, Samuel Hill, Carl White, Freddy White, Donald Elligan, Kenneth   Fearn and John P. Franklin. In 1952 the chapter organized the “Kappa Kowboy   Kontest” in which each brother was to sponsor a boy between five and ten years   of age.  All of the money raised was used to buy shoes for needy children. Some  of the  young men in the first contest who later became fraternity members were:    Lamont Vaughn, Warren Logan, Jr. and Cicero C. Henderson, III. The first “Kontest” raised almost $2,600.00. In 1965 Chattanooga Alumni Chapter appointed James E. Jones and Carl E. White as it’s first Dean and Assistant Dean of  Pledgees. Charles W. Fields was the chapter’s first initiate.

Kappamen   in Chattanooga have long been active in the educational, civic and  political   activities of the community. In 1971 John P. Franklin, Sr. was
elected as the   first African-American City Commissioner, later becoming Vice Mayor. He served   as Commissioner and chairman of the school board for twenty years. During this   period of time James E. Jones, Dr. C. C. Bond and Sherman Matthews were other   Kappamen elected to serve on the School Board. In 1998 his son, John P. “Duke”   Franklin, Jr. was elected to the City Council. Moses Freeman, Jr. serves as   Executive Assistant to the Mayor and was 1998 President of the multi-million   dollars River Bend Music Festival.

In higher education, Richard L. Brown, Jr. was named Vice Chancellor of Operations at the University of Tennessee at Chattanooga. In Sports, Nathaniel H. Anderson became the first African-American to become a regular official in the Southeastern Conference. He also served as president of the football association. In hospital  and health administration, Irvin O. Overton serves as Executive Vice President of Erlanger Medical Center. Lamar J. Partridge is a leader in the field of finance and President of Valley Capital Corporation, which provides equity and debt financing to small and minority businesses.

The Chattanooga Alumni  Chapter of Kappa Alpha Psi held its meetings at the homes of kappamen until May  1965 when the Chapter purchased the Fraternity House at  1014 East Martin Luther  King Boulevard, formally East 9th Street. Historically, the house once served as   a female dormitory, cafeteria and chapel for Zion College, which was a black   business and religious oriented  college.
Chartered and Incorporated on June 1, 1946 All Rights Reserved Chattanooga Alumni Chapter of Kappa Alpha Psi Fraternity, Inc.